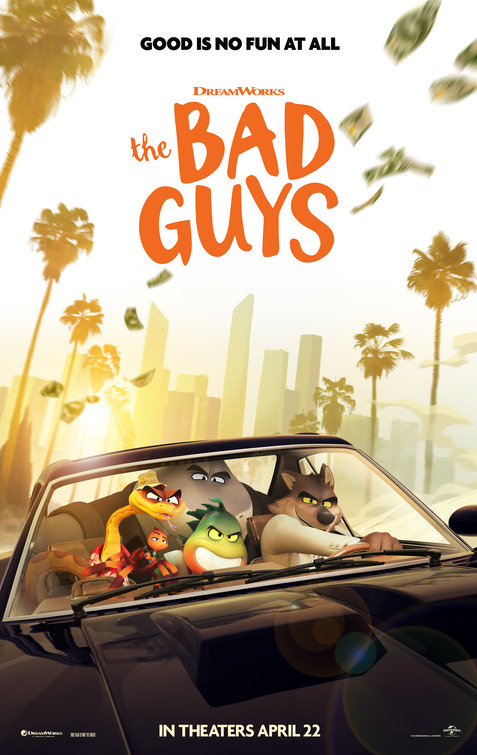 Growing up we had plenty of people and movies telling us how wrong it is to judge a book by its cover. Yet every day we do just that. Every time you see a spider the first thing that goes through most of our minds is to step on it, because we have been told they are scary, but not all spiders are bad. Enter The Bad Guys  a movie that tries to answer the eternal question, “are they bad, or are they just drawn that way”?

For a group of friends the answer is definitely they were drawn that way, so why not be the way everyone already thinks you are. The group is lead by Wolf ( Sam Rockwell), a smooth and charismatic  guy who loves to do crime. He hangs out with Snake (Marc Maron), the group’s Mr. Grumpy Pants, Tarantula (Awkwafina), Shark (Craig Robinson) and Piranha ( Anthony Ramos) , who is quite a gas to be around sometimes. This crew has done it all and they have never been caught, but being perfect can become boring, so they come up with a plan to steal The Golden Dolphin, a feat no crew has accomplished yet. The plan is set, all they have to do is get by The Governor, Diane Foxington (Zazie Beetz) and the police chief (Alex Borstein) and the prize will be all theirs.

Something though happens on the way to their perfect crime, Wolf saves an old lady from falling and it seems being called a “good boy” and being pet behind the ear unlocks something inside of Wolf he didn’t know was there. After brushing it off he focuses on the job, but just when they think they are free and clear something happens that was certainly not part of the plan. Luckily for them, Wolf is pretty charming and he convinces Professor Marmalade (Richard Ayoade) that he can unlock the good in them all and give him the chance to do so.

Written by Etan Cohen, Yoni Brenner and Hilary Winston from the books Evil Boys by Aaron Blabey , The Bad Guys  tries to answer the important questions. Like why do the bad guys become bad and is good aways really better? What I took away from The Bad Guys is what could have been. While the Ocean’s Eleven style story is a nice touch as are the references to classic movies, but the characters in the film never feel like they are having as much fun as they should be. While the animation is solid and there are some fun moments, most of the time you see a movie that could have stood out from the others, but instead we get things we have seen before. With all the characters having sharp teeth, the movie really lacks bite and it may  entertain the half of the audience that also happen to be half-pints, the older part of the crowd might be less satisfied. For a kids film it will work just fine and hey maybe it will save a few spiders, but these bad guys deserved better.