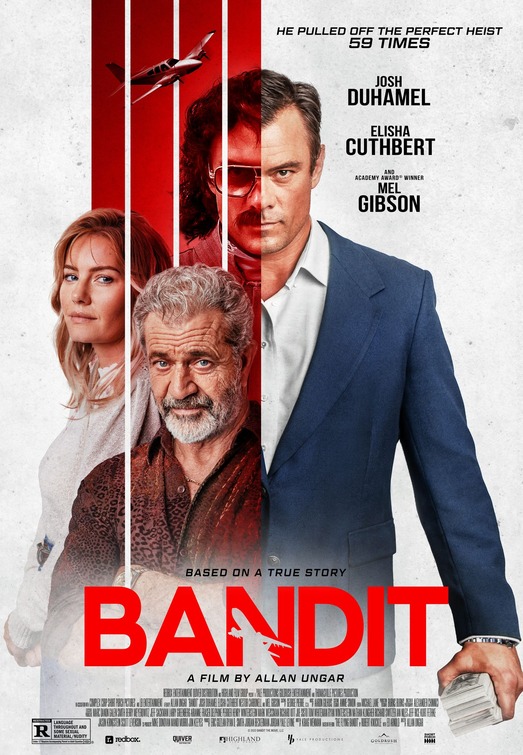 I have always been a fan of those movies based on real life stories, because real life always has the best ones. Of course I know that as good as some of those stories are, for a movie they need to be juiced up a little, that is just the nature of the game. Bandit  is the latest true life story to come to the big screen that tells the story of a man named Gilbert Galvan Jr.( Josh Duhamel) and the way he made his money.

You see Gilbert has not made his money the honest way and it has landed him in jail in Michigan, where he escapes and runs off to Canada. Once there Gilbert tries to change is ways and after buying a homeless man’s ID, he gets a job selling ice cream. Things start to go south as the place he works eliminates his job, thus leaving him looking for a way to make money again. It is by chance that he goes to a bank and after pretending to be a security expert finds out that it is rather easy to rob a bank in Canada. Before he becomes a bank robber though he meets a nice Canadian girl named Andrea (Elisha Cuthbert), who he falls for and ends up marrying. Unbeknownst to her, Gilbert’s job is not legal, as he buys different disguises and easily robs banks by just asking them for the money. The money is good, but when Gilbert wants to tackle bigger banks he gets the help of a local crime boss, Tommy (Mel Gibson) , to help him fund it. Things get bigger and before you know it they have a task force hunting for them as knocking over fifty banks will do.

Written by Kraig Wenman from Robert Knuckle’s novel, Bandit  is another one of those stories that just proves living in the eighties was better. Wennman uses a little playfulness with injections that are amusing, like assuring something really happened at moments that just seem to wild to have happened. Director Allan Ungar and Wennman try to make the film snappy, but the run time cuts some of those legs off. As the movie feels like it should have been about 30 minutes shorter. By the time we get to the conclusion, there is a little fatigue with the time it took to get there.

Bandit, because of its subject matter was only going to be made or broken by whoever played Galvan. Duhamel is not a bad choice as he does flash some strong charisma that you know would be needed for a role like this. He and Nestor Cabonell, who plays the lead detective hunting him down, both bring some color to their roles as they toss the ball to one another like they are playing a nice game of catch. This is not your ordinary bank robbery movie, as this one believes you get more by being nice and wearing a good disguise. Bandit is a fine enough film that is hurt by its need to show too much, but lucky for them I has some rather charming performances that save it from being bad. So when it is time to ask you for your money on this one, you shouldn’t feel bad doing what so many tellers in this film did.