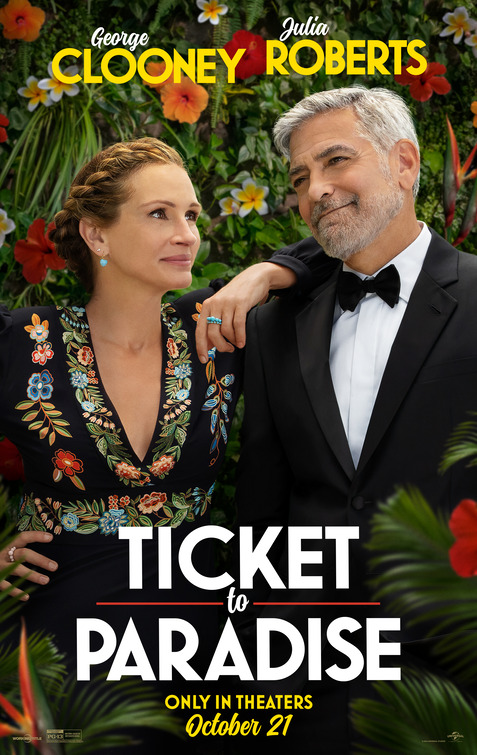 At one point in time Julia Roberts and George Clooney were what you thought of when someone said the word “movie star”. Time though, like it does with everything, changed that, mostly because the two of them both found other things to do in life other than play someone else. Fortunately for us, time works different for some and with Ticket to Paradise Clooney and Roberts are going to make you feel like they never left.

David (George Clooney) and Georgia (Julia Roberts) were once a thing some 25 years ago, but you can safely say Georgia is no longer on David’s mind. The two of them want nothing to do with each other, but they have a daughter, Lily (Kaitlyn Dever) , and she is graduating from college. Graduation goes well, and Lily and her friend Wren (Billie Lourd) are off to Bali to have some fun before they have to return and become adults. Needless to say Instagram gets lots of pictures, but during one of their excursions, they are forgotten about and left out at sea. No worries though, because a cute guy in a boat named Gebe (Maxime Bouttier) finds them and not only are they rescued, Lily is struck by a thunder bolt, in which a vacation is about to become a lot more. A marriage proposal soon follows and now David and Georgia have to come to Bali, where they plan to do whatever they can to make sure the mistake they made doesn’t happen to Lily. Their plan is simple, look like they approve, but once Lily is comfortable then plant doubt get her back home and resume her planned life. Of course their plan goes wrong, but maybe they found something else to agree about, other than ruining their daughter’s wedding.

Written by Daniel Pipski and Ol Parker, the latter also directing, Ticket to Paradise feels like most romantic comedies, but in a really pretty place.  Pipski and Parker knew they wanted Clooney and Roberts and by getting them it becomes just about not messing it up. Well with some sharp dialogue and charisma to spare from its two leads, Ticket to Paradise is a pretty nice and harmless and works when it does because it has fun. Although this really is all about Clooney and Roberts, which dims the brightness that is Dever and Lourd  but somehow Lucas Bravo, who plays Georgia’s boyfriend, breaks though some. All of this adds to a pleasant, but easily forgettable rom-com.

Ticket to Paradise  doesn’t really give you any exciting storylines and it’s pretty predictable, but when you have Clooney and Roberts, do you really care?  For me the answer is no, as you get a carefree movie that is easy to digest as well as some smiles along the way. It reminds me of those bubble bath commercials that a women would sit in a tub and ask to be taken away. Well Ticket to Paradise offers something like that, for a little less than two hours, you get to exchange everyday life for a fairytale, and that’s not so bad is it?