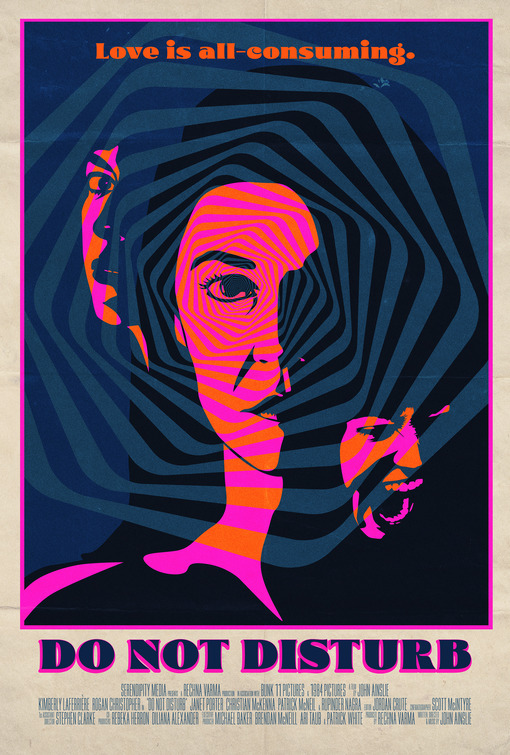 Maybe it’s just me, but when I walk down a hallway at a hotel, I often wonder what is going on behind that door with the “Do Not Disturb” sign hanging from it. Maybe it’s because they just want to escape from the world and not be bothered, or is there some grisly scene going on behind those doors? John Ainslie’s new film Do Not Disturb gives us one possibility and what I hope is something that never happens, as least for the hotel staff’s sake.

Chloe (Kimberly Laferriere) and Jack (Rogan Christopher) have just gotten married and or on their way to their honeymoon. They have chosen Miami as their destination, but choosing to go during the off-season to be able to afford it. While waiting for their room they meet another traveling couple who they later have dinner with, but it’s the after dinner party where things get fun. Once back in their room, drugs are taken and things get a little out of control, causing Jack to take Chloe back to their room. You can tell already that the bliss is long gone from this relationship and it doesn’t really seem like these two like each other very much. When they are not fighting, they are trying to enjoy their trip, but one day at the beach and they meet a guy who seems out of it. Although he is pretty crazy, he does leave them some drugs before he walks into the ocean and disappears.  You might think after you saw that you would not take the drugs that man just gave you, but Jack can’t pass up free drugs. His first plan is to sell them, but soon it’s about trying them out and once he and Chloe do, their vacation takes a turn.

Do Not Disturb  takes place primarily in a hotel room, which makes it really fun when the drugs kick in, which really amps up the feeling of claustrophobia. Employing a slow build up. Ainslie, uses the first half to focus on Chole and Jack’s problems, which works in his favor, but as the cracks grow with Jack and Chole, we get a glimpse of just where things can go with them both. That place is twisted and dark as the tripping out makes them lose time, but also discover a taste for human flesh that make for some fun clean-up times after.

Do Not Disturb  really turns into a fun ride that is all bloody gore and dark humor. Everything works because of the performance by Laferriere, who by the end of the film is doing her best Dexter Morgan impersonation. She really inhabits the character and with the way she plays her, it is easy for you to go along for the ride. I had a fun time with this one and loved the use of practical effects and of course the gore. It is also a great reminder of a few things,  don’t do drugs a stranger gives you and that horror still explores real issues better than most movies.