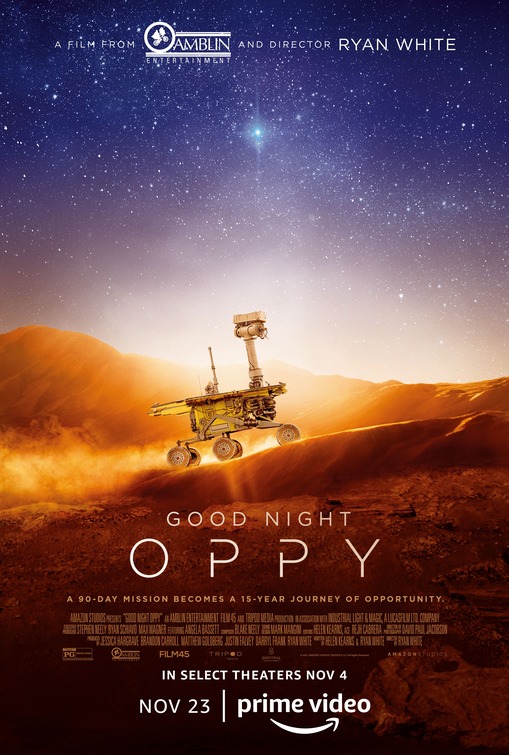 “Space, the final frontier…” these words were said during America’s missions to get to the moon. Although we wouldn’t land there until three years after the original Star Trek premiered, it was the possibilities that fueled the belief that we would conquer the stars one day. Fast forward to 2003 and we have been to the moon and back and now have our sights set on the red planet of Mars. But before we send astronauts to Mars, we first must explore it and NASA has found the two perfect candidates for the job.

NASA has built and designed two rovers, that are more than wheels and the solar panels that power them. With the names Spirt and Opportunity, these bots mission is to land on Mars, spend ninety days collecting information and to celebrate all of its findings. Those ninety days though turn into seven and fourteen years long as Spirt and Opportunity become the little rovers that could. This however is not just the story of two rovers and their quests. This is just as much about the scientists and engineers who put their life’s work into making these rovers work. We see as the years go by, how different people come aboard to be the ones to keep it all going, including a teenager who was there at the original launch and now works for the program. Good Night Oppy  shows how the rovers had an effect on kids growing up, as many of the later operational staff were inspired to join NASA because of Spirt and Opportunity. This is what makes Good Night Oppy such a wonderful film, as the personal connections between the rovers and humans is so strong. Emotions are on front street and it carries over to the audience at both their highs (the safe landings) and lows (the end of both rovers ). Some of those highs are achieved through stunning VFX from Industrial Light & Magic and through archival footage from the missions. Editors Helen Kearns and Rejh Cabrera combed through thousands of hours of footage that combined with the VFX give you an even more emotional attachment to the rovers. I really don’t think a movie this year has made me feel as much as this one, as I shared in all of the successes as well as the obstacles that had to be overcome.

The story of the Mars rovers is a pretty incredible one. It is a story of the human spirt and its resilience and the great things we can achieve when working together. I had plenty of thoughts and feelings running though me, but the only feeling I had when it was over was that of awe. What the people behind Spirt and Opportunity were able to do and for the filmmakers who put it all on display for us to see. Good Night Oppy is both uplifting and inspirational and when you finish watching this, there is a good chance you will believe anything is possible.