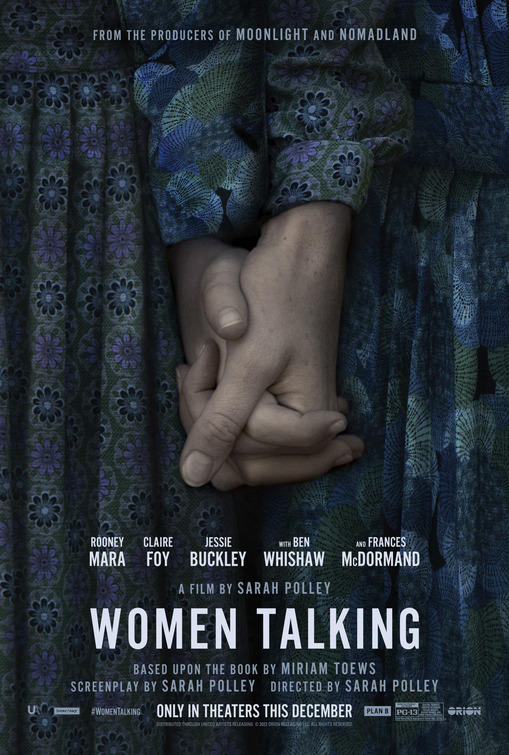 In the early 2010’s in a Mennonite community in Bolivia, women would often awake bloody and bruised and then told that it was the work of Satan or they were just making it up. It turns out that the men in the community were using animal tranquilizers and repeatedly assaulting and raping them.  This story was told in Miriam Toews’s novel Women Talking  and now in a movie with the same name written and directed by the great Sarah Polley, that will surely leave you speechless.

We open up with a woman waking up, legs bruised and disorientated and confused on what just happened. This was a common occurrence in this community, until one girl woke up in the middle of being raped. The authorities from the outside were brought in and a group of men were arrested, but soon after the rest of the men gather the money they need in order to bail them out. The women decided to hold a vote on what to do, say nothing, stay and fight, or leave. After a tied vote with the options stay and fight or leave, a group of them are voted to make the decision for the rest of the women. They meet in a barn with the clock ticking on the men returning.  The meeting starts with Scarface Janz (Frances McDormand) auguring they can’t leave, as they will forfeit their rights to enter the kingdom of Heaven. While there are some in the group who might believe that, Salome (Claire Foy ) is done and says she will not let any harm come to her kids and saying if she stays she will become a murderer. They are also joined by Mariche (Jessie Buckley), Ona (Rooney Mara), Mejal (Michelle McLeod), Agata (Judith Ivey) and Greta (Shelia McCarthy), in a conversation not just about their future but their children’s as well.

Women Talking  is not a subtle film, as it plunges you in right from the opening moments with its harrowing scene of the aftermath of sexual violence. The violence though only serves to guide the characters in making their decision, but for us, the viewers we are guided by the characters. The cast is incredible, as each actress incorporates the personality and vales of the women she represents. The woman argue the pros and cons of each option, each having good reason for their viewpoint, all while the constant fear of the men retuning hang over them. Polley’s script is excellent and it allows the frustration and desperation stream throughout. Polley and cinematographer Luc Montpellier gives us an unsaturated palate, removing much of the color and highlighting the muted world these women live in. All of this adds up to an honest and rooted film that has to be seen.

Women Talking  is a story that tackles difficult conversations all while showcasing some of the best actresses working today. This movie, shot mostly in one location, are some of my favorite kinds of movies and this one does not disappoint. Although fans of the book should know the movie does change how the story is told, but for me it only added and took nothing away from the film. What you end up with is a deeply textured experience and one that I promise will stay with you in both your heart and mind.