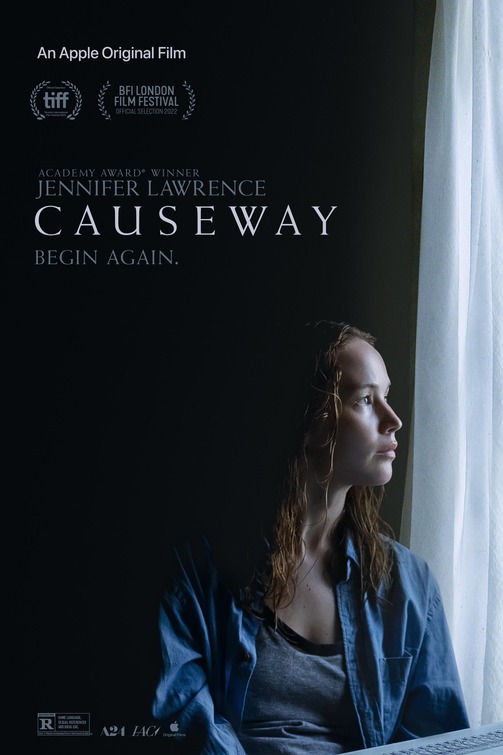 There are actors and actresses out there where I don’t really need to know anything about the movie in order to want to see it. Jennifer Lawrence has long been on that list and with only one other performance since 2019, it is safe to say Causeway was a must see. Adding to that Brian Tyree Henry is also starring and it is an A24 release. You have my attention.

Lynsey (Jennifer Lawrence) is returning home after serving in Afghanistan, where she suffered a brain injury after an IED exploded next to her vehicle. Her days are now filled with panic attacks and her nights plagued with nightmares as she tries to settle back into her old life. Not being able to deal with much, she takes a job as a pool cleaner as she tries to recover so that she can go back into the service. Along the way with her new routine she meets James  (Brian Tyree Henry) who is dealing with his own trauma from life. Soon the two of them are hanging out a little more often, James giving Lynsey rides when she needs them or when they both just need some company. Lawrence who is known for her bubbly personality disappears completely into Lynsey, who looks lost and unsure after what has happened to her. Lynsey falls into unhealthy habits and feels pretty hopeless as she struggles with having to take medication and the regular doctor’s appointments. James though has come at the right time, as has Lynsey for him, together they fill a void that the both have. For Lynsey though, her only goal is re-enlisting, which means regaining her strength to the point where she can convince her doctor that she is good to go back.

Written by Ottessa Moshfegh, Luke Goebel, and Elizabeth Sanders, Causeway  is a story about trauma at its core. It shows that not all trauma is obvious, that it is often subtle and lurks just under the surface. It is also about the acceptance and healing and how kindred souls often are drawn to each other. Although the subject falls in the grey zone, the film has a fantastic visual palette as well as a great score by Alex Somers. Where Causeway is at its best is in the performances by Lawrence and Tyree Henry, which despite their subtlety are quite powerful. You feel the friendship between these two lost souls and Tyree Henry is so endearing that you just want to give him a hug and let be there for him.

Causeway  shows us what it is like for some of those that return from the battlefield and how maybe they body has returned, the mind may take time to catch up.  It is sensitive and significant in its portrayal with the different ways we deal with grief and trauma. It is deliberate in its pace and honest and not as heavy as its sounds as it has plenty of moments of levity. This story is relatable to a lot of people and while at times it can feel generic, the one-two punches of Lawrence and Tyree Henry or worth the price of admission alone.