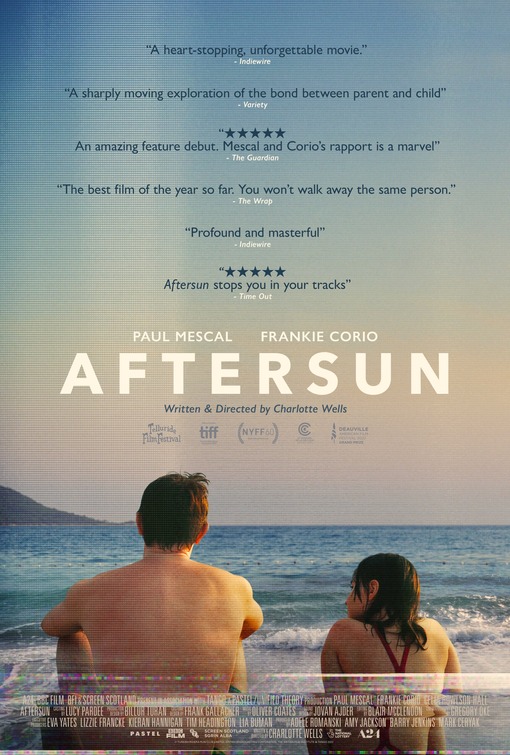 Everyone can recall their vacations as a child with their family and the good times that were. As a kid my parents would take my sister and I on road trips all across the American west. Those trips are some of my most fondest memories of not just my childhood, but also my entire life. Charlotte Wells debut film Aftersun  is about one of those memories in Sophia’s (Celia Rowlson-Hall) life and the summer vacation she took as a preteen in Turkey with her father.

We open up with young Sophie (Frankie Corio) recording her father Calum (Paul Mescal) while she interviews him by asking him questions about his childhood dreams. Calum and Sophie’s mother are no longer together and this is a father and daughter trip that might be one of the last “ hanging out with dad” trips Sophie will want to do. Most of their days are spent enjoying themselves by the pool in what seems like one of those all-inclusive resorts that are always a good time. When they are not there, they also spend time eating at fancy hotels, going snorkeling, with Calum even letting Sophie hang out with some older Brit kids unsupervised. We live some of these moments through recordings that Sophie and her dad had made throughout the trip. This effect and with the regular narrative gives us the viewer a glimpse as if we are living in Sophie’s memories and this time she held her dad in such high regard. Sophie and her dad’s relationship have more than a father and daughter feel to it, as they also come off as best friends, but that does not lessen that father-daughter relationship. It can’t because it comes off as so authentic and sincere, which feels that way because of the performances of Mescal and Corio, who just present themselves as real. Sophie as an adult has her own family now and as she looks back it reminds us how we see our parents as parents and we forget they are people as well with their own problems. It is that reason that Sophie can’t look at that summer through rose colored glasses any longer as the cold reality comes into focus with a blow that is heartbreaking.

With Aftersun, Wells paints a family picture that is very poignant, but in an unconventional and stylistic way. It goes back and forth between reflection and memory while delivering an enchanting view about the end of childhood and the hidden mysteries that lie within it. The story from Wells is not just about family as it is also about nostalgia in general and how everything always seems better in the past. Wells’ story is astonishing and will leave a lasting impression on you. It has a soft and sensitive touch that has incredible intimacy and nuance. When you add the performance by Corio, who as young Sophie is fantastic and that of Mescal, who is incredibly natural as Calum, you get one of the best movies of the year.  Aftersun is an intoxicating experience that will make the audience reminisce about their own time with their fathers and the time when the world, even with its flaws seemed perfect.