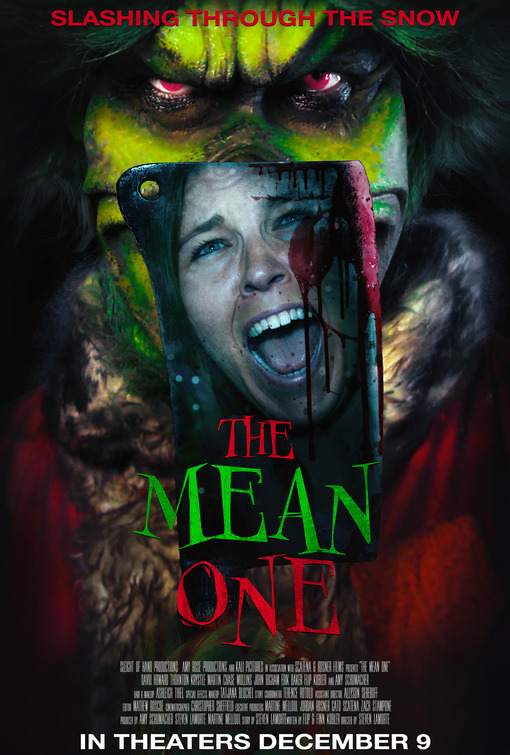 If you are a fan of Gremlins, I am sure you have never forgotten the reason why Phoebe Cates character Kate doesn’t celebrate Christmas.  I remember at the time she was such an outlier for me, I mean who doesn’t celebrate Christmas, but it turns out she had a pretty good reason. Now we have to up the ante, as a whole town, called Newville “ba-humbugs” the whole holiday, and like Gremlins, has a green reason for doing so.

On a cold Christmas night, little Cindy came across a green Santa Claus, who seemed bent on taking away Christmas cheer. Cindy gives him her necklace and a kiss on the check, but this is not that story as another path was taken that faithful night. Cindy’s mother walked in on the moment and seeing the green Santa, screamed “Monster!” and tried to beat the him to death. Unfortunately it did not go her way. After years of therapy, Cindy (Krystle Martin) and her father have returned to Newville, as Cindy’s therapist thinks it would do her some good. Upon their arrival they notice the lack of any Christmas decorations in town. It has nothing to do with that night, as no one believed Cindy and what she saw, but there is a doom hanging over the town. This time the wicked version of Santa takes her father and no one believes her, except the town drunk, Dr. Zues (John Bigham), and maybe Officer Burke (Chase Mullins), who has a crush on Cindy. Together they try and piece the story together, so Cindy can get her ultimate gift, revenge for her parents.

Written by Finn Kobler and Flip Kobler, The Mean One, starts with elements very familiar to children stories, including a narrator, but then comes the twist. That twist is that if there is once ounce of Christmas celebration the night is not going to go well. We see that with Cindy’s father, but he isn’t the only to feel the anti-Christmas wrath.

The Mean One is filled with parody and as a movie it can be at times, entertaining, even if some choices didn’t quite catch on. If you are expecting a gore fest, you will be disappointed, while this film is full of blood. The problem is that it is CGI blood, which looks too cartoonish, but then again that might be what the filmmakers were going for. You can feel the low production value, despite its interesting concept. It does not however live up to Christmas horror of old like Black Christmas, Silent Night,Deadly Night or even some recent holiday gore like Anna and the Apocalypse and Rare Exports. This one is not the black comedy that will be remembered for its blood soaked kills. I hate to be the “mean one” but for me this will not be added to my list of horror Christmas staples.