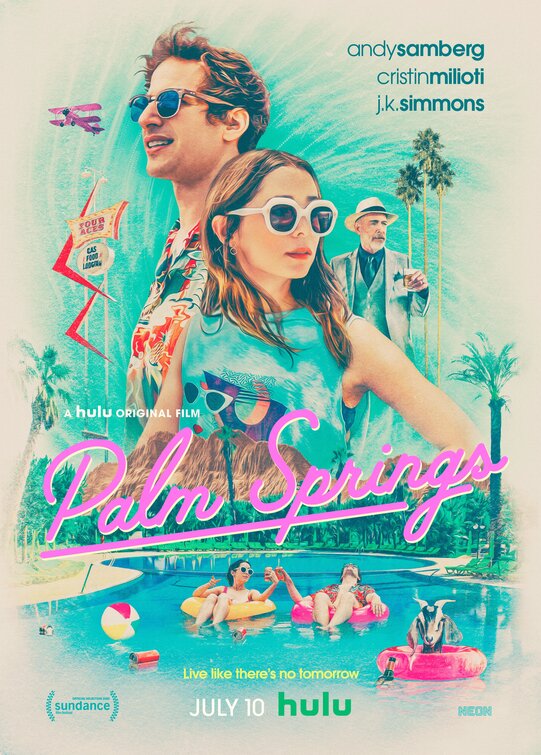 If you had to relive one day of your life over and over again you could do worst things than to be stuck in a wedding. That’s exactly the life Nyles (Andy Samberg) is living right now in this take on what is becoming a genre of its own, the time loop movie (or as I like to call it Groundhog Day in a ____). While there has been more than few of these films since we were blessed with the Harold Ramis classic, each one has put their own stamp on the idea, and Palm Springs continues that tradition. The world that writers Andy Siara and Max Barbakow, the later also making his feature directorial debut create is one you would enjoy waking up to each morning.

For Nyles this isn’t even a wedding of people he knows, but instead it is his girlfriend’s Misty (Meredith Hagner) friend’s wedding. One of the good things about being stuck in a day where you attend a wedding where you don’t know anyone, you have plenty of time to get to know all of them. That is exactly what Nyles does and he does some great crowd work, but there is only so many people in this one wedding he can meet. One night he hangs with Sarah (Cristin Milioti) the sister of the bride who also happens to be the black sheep of the bride’s family. Everything is going swell, but just when things are getting hot, something causes Nyles to retreat to a cave that is glowing, in which he tells Sarah not to follow him, but curiosity wins out. Sarah wakes up stuck in the same day that Nyles has been stuck in, joining him and another guest at the wedding named Roy (J.K. Simmons), who only comes back around every so often to try and hurt Nyles since he blames him from what happened to him. Now Nyles has Sarah and with the time they have together they discover a lot more reasons to find a way to escape the loop they are in.

Like Zombie films, you have to find a new way in with a story that follows the Groundhog Day approach. You have to be unique and it doesn’t take long for Palm Springs to do just that. In this world the laughs come frequently and that has a lot to do with how good both Samberg and Milioti are together. They are a pair you would for sure enjoy being stuck with, and for me that is about as good as complement as I can give. Sure the story goes the routes you expect, but it also has enough of the off-beat moments that take you by surprise. Samberg seems to make the right choices when it comes to the films he makes and speaking of right choices, you should be watching Palm Springs because as some of us are stuck at home literally living the same day over and over again anyway, giving this a watch just might be the best decision you make today.