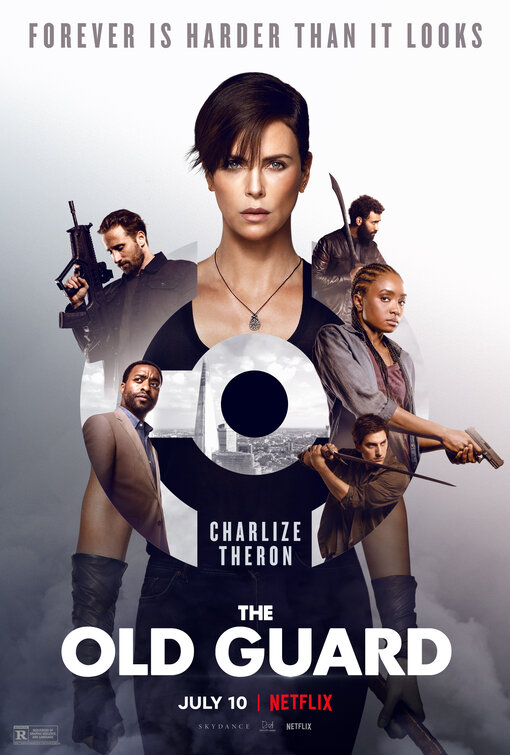 Finding a way to make a movie based off a graphic novel or comic book these days is not too difficult. Hard to believe there was a time where you were laughed at for trying such a thing (see 2004’s Catwoman, actually, never see 2004’s Catwoman), but long gone are those days as now studios try to use comic books to find that next great franchise. What I have learned is that there is plenty of love to go around, it just has to be appealing, entertaining and most importantly put through a cinematic filter in order to bring us as viewers aboard. Up for that task in Netflix’s new offering The Old Guard, based on a 2017 comic of the same name created by Greg Rucka and Leandro Fernández, a story about a team of immortal mercenaries, think Highlander, but instead of “there can be only one”, there are four, with room to grow.

The team is led by Andy (Charlize Theron), who is said to have forgotten more ways to kill than all the armies through the history of time have known. She is good at what she does, but after more years than she wants to say under her belt, she is starting to wane on the whole “helping humanity” role. That feeling comes after being double crossed, but as she and her team head home they are alerted to another like them by a dream, that announces her arrival in becoming one of them. Andy goes on her own to find this girl, knowing she will have questions and only after a brief scuffle finds out her name is Nile (Kiki Layne) and that it is going to take a little time for her to come around. Andy and Nile rejoin the team and start to look for the man who double crossed them, a man named Copley (Chiwetel Ejofor), who has been piecing together the team’s mysterious puzzle and has joined with someone to capture them, so that their ‘gift’ could help humanity. That is not in their plan and the team will stop at nothing to make sure it doesn’t happen.

The Old Guard is a great concept, a team of immortals who fight to keep their identity secret, and saving the world, with Charlize Theron as the lead. For the most part it doesn’t disappoint with its impressive action scenes and the fact that we get to see Theron wield an axe. Now that’s all good, where it hits a few bumps is in the time between the action set-pieces, where things sometimes feel like they go from sixty to zero and leaving us with a little whiplash as it tries to deliver on the emotions. That though is not too hard to look past, as the concept is just so cool that you can forgive the sudden stops in the road you endure. I would have enjoyed seeing this in a theater, but Netflix has become a landing spot for action movies like this one. I would rank this one with their better offerings like Extraction, an entertaining action movie, whose wild stunt work does all of its heavy lifting. Besides if for no other reason watching Theron be a bad-ass should be enough, this movie being entertaining is just the cherry on top.

The Old Guard is currently streaming on Netflix