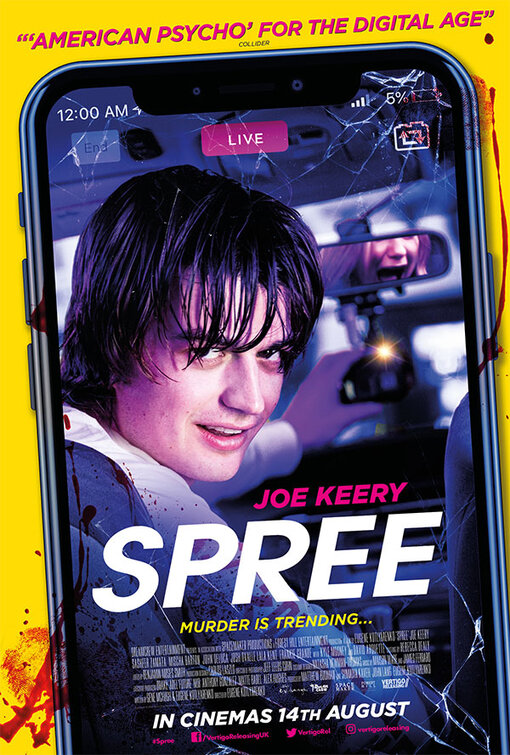 There seems to be a certain age group that live for social media fame. I for one could care less if I ever went viral and choose closely what I share on social media. I can understand it though, I mean who wouldn’t want to be showered in attention, to be the “in” thing everyone is talking about at that moment. That is the idea behind Spree, someone whose who life is defined by the amount of likes he gets and what he would do to get them.

Kurt Kunkle (Joe Keery) has a void in his life and with his online profile @KurtsWolrd96 he tries to fill it. Every day he puts his life on display and always with the same result, no one is watching, he just can’t get those likes. Having reached the point where he would do anything to go viral, he hatches a plan that is sure to do the trick. You see Kurt is a rideshare driver, and after decking out his car with cameras he heads out to make his wish come true. Using spiked water bottles, something that might make you skip taking one in your own riding experiences, he knocks out his passengers and well things don’t go well for them. Kurt’s plan is not working as expected, but when he picks up Jessie Adams (Sasheer Zamata), who is an up and coming comedian with a lot of followers, he hatches a new plan. Things keep escalating all in Kurt’s pursuit of viral fame and once he get the eyes he longs for the violence level goes up all in the name of fleeting fame.

You want to say Spree is just a movie, but you know something like what you are seeing feels like it could happen off screen. There is a lot going on as you watch this movie, a lot of camera switching and when Kurt is broadcasting, you try and take in the action as you read the comments scrolling on the screen, because we all know the comment section is where the real action is. To really give you a challenge, director Kotlyarenko sometimes had up to three streams at once coming at you, which makes it a lot of fun trying to keep up with it all. If you enjoy dark comedies like I do, then you are going to enjoy this ride and want to catch it a few times to see what all you missed. Even as I was enjoying it though there are few cringe worthy things going on here that might make you want to turn away rather than watch. Spree is a fun display of wanton fame that at times seems to be holding the mirror to the audiences and anyone who like Kurt is all about the likes and going viral. Maybe this is what we needed, to see the extreme in that pursuit and like the # he uses in the film, this is a lesson that is as funny at times as it is relevant.

SPREE is available in select theaters, drive-ins, on demand and digital August 14th.