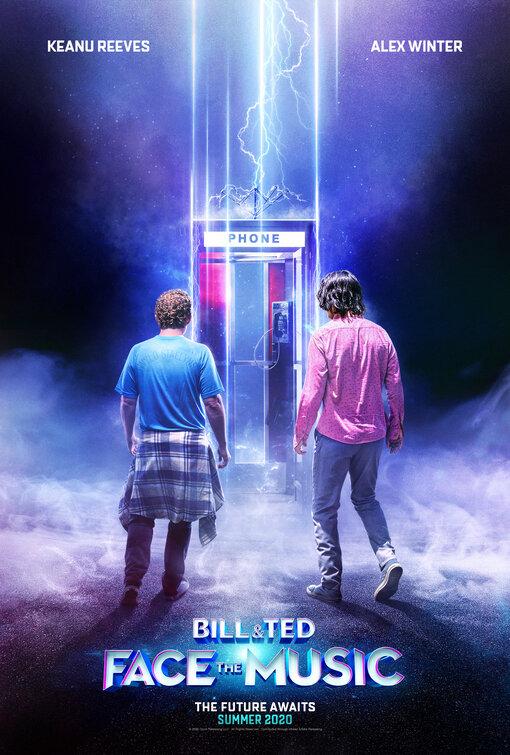 There is a saying that timing is everything and when it seems there is anger just about everywhere you look, to have something come along that is filled with so much love, well it feels like the perfect time. Bill & Ted Face the MusiDean Parisotc is just a movie I know, but hear me out, what if like a plot from the film we need not one song to unite the world, but one movie, and this is the one? A most excellent idea if you ask me.

Bill (Alex Winter) and Ted (Keanu Reeves) are still doing the work and still trying to make that song that they were told unites the world, with no luck so far. They have their wives, who were once princess and with them they have a daughter each who are their age when their first ‘excellent adventure’ started. The two girls named Billie (Brigette Lundy-Paine) and Thea (Samara Weaving) seem to be more clones than offspring all the way to their love of music. Just when things seem to be as normal as they can be in Bill and Ted’s life, a visitor from the future arrives to tell them that once again that the fate of humanity rests on them making a song that will unite the world. So away they go to learn that song, and what better way to do that than to travel to the future and just get the song from future Bill & Ted, since they have already put in the work. Time travel is a bitch though and one trip leads to another as the whole family gets involved this time, because maybe it takes more than Bill & Ted to make that song happen.

I am going to go ahead and put this on front street, I adore this movie. There is just a pure innocence about these films that just fill your heart with love and of course the desire to party on. Both Reeves and Winter fall right back into their roles and you don’t even realize that it has been almost thirty years since our last excellent adventure. Nothing about this movie feels forced and while it may not be the movie we want right now, it’s the movie we need. You can just feel the love that went into the making of this film and translates to every minute on screen so when you are not laughing you always have a smile on your face. I could go on and on about the greatness of this movie, maybe its nostalgia or maybe it’s because of the energy it puts out, an energy that is hard to find in today’s climate. Just watch this movie and let it fill your soul with the goodness and I promise you, you will have the most triumphant of times watching it.

In Theaters and On Demand August 28th