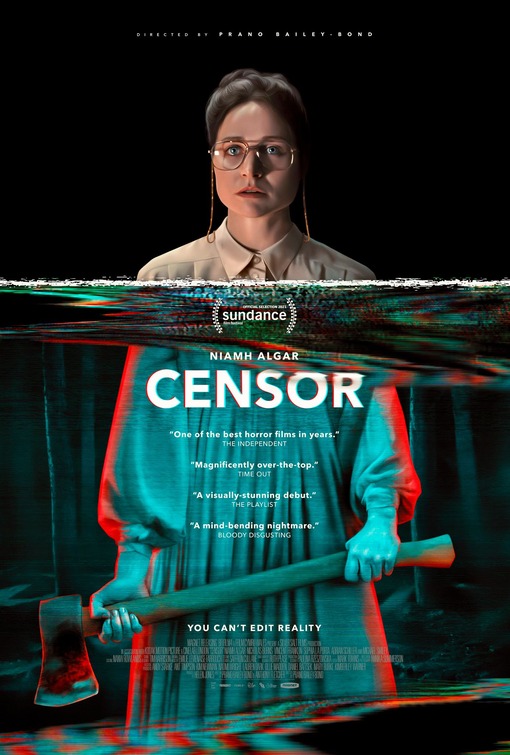 The question of what effect horrifying images can have on us has always been one that has plagued media for decades. In 1984 the British Parliament passed the Video Recording Act which has strict censorship laws. These censors would be bombarded with images as they watched movies in an effort to protect us from what they see, which may be too intense for the public, but what about the censors themselves? Writer/Director Prano Bailey-Bond has decided to answer that question for us with Censor, a horror movie that comes with its own set of images that will stay with you long after the final reel.

Enid (Niamh Algar) is one such censor who after a tragedy befalls her eventually finds her calling in protecting society as a whole. You see when she was younger, Enid and her sister were playing, when her sister went missing, something Enid has blamed herself for ever since. Now that is she is one of the gatekeepers to what the people see, a job that she takes way too seriously, at least compared to the other censors. Even though most film that takes place in the eighties and is filled with excess colors, that isn’t what the world really looked like, so Bond and cinematographer Annika Summerson chose a pallet that consisted mostly of grays. That look makes the world feel cold and bleak, which gives the film a more grounded and real atmosphere, and thanks to filming it on 35mm it looks gorgeous. Enid continues watching a lot of “Video Nasties”, a term that was coined for the low budget horror films that contained some pretty graphic content. It is while watching the latest one that she gets an eerie feeling of familiarity that connects back to the night her sister disappeared. It is that feeling that drives her to try and find out more about the filmmaker, even taking a trip to a local video store to find some more of his work. Enid falls down the rabbit hole as she is convinced the star of these films is her long lost sister, which pushes her to places that you would never thought she could go.

Bond shows a love for the genre in little nods to legendary horror filmmakers with a lot of the choices she makes. I have already mentioned the beauty of the film, it’s few flaws come in the form of the story and pacing. We never really get much detail on what happened when Enid was younger and while that could have been a choice, it just leaves things a bit too cloudy when trying to understand her trauma. When it comes to the pacing, it’s just a little uneven at times, but the run time of just under an hour and a half helps navigate those bumps. With that said Censor is a hell of a debut and will go down as one of the better horror films of 2021.