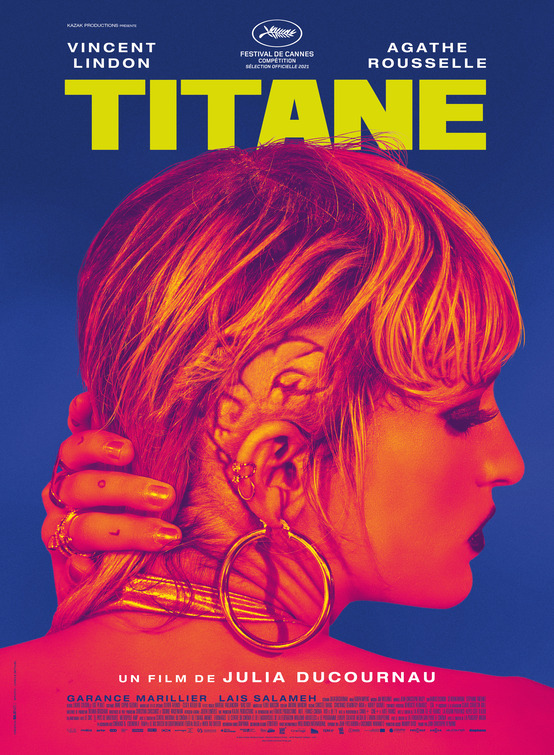 Some filmmakers don’t come quietly on the scene, instead they carry a sledge hammer to announce their arrival. Julia Ducournau did that with her feature debut Raw, which told the story of a vegetarian girl, who during hazing at a veterinary school get a taste of meat, but not just any meat. It is after this film that fans of genre films were eagerly waiting for what Ducournau would do next and that time has finally arrived. Now we have Titane, a film that unlike Raw, which subtly attacked the subject, here we get some ideas that are obviously close to the directors heart, Docournau declares her love for David Cronenberg and Stephen King, which makes me love her even more.

The film opens with a child and a man driving down the highway and in the vehicle a little girl is doing her best to annoy the man driving, and it is working. When she unbuckles her seatbelt the man turns to tell her not to do that and loses control, which causes the little girl to hit her head on the window. That accident left Alexia (Agathe Rousselle) with a titanium plate in her head, as well as a scar to show the world what happened. As an adult, Alecia performs as an erotic dancer at car shows, and receives plenty of attention from both men and women. She does not look like a woman who desires physical closeness and when a guy dares to kiss her, he receives a hairpin in a body part for his transgression.

It is at this early point that we learn that Alexia  might have some problems and as the number of her victims goes up, she is soon forced to go underground. She wants to hide as a man, as she thinks that is her means of escape and becomes Adrien, a disappeared child, who is still wanted by his father Vincent (Vincent Legrand). Without asking any big questions Vincent takes back Adrien with open arms, but Vincent’s demanding nature is putting more pressure on Alexia-Adrien and it is making it more difficult for her to hide her female body. But the pairing of two wounded souls help Vincent ignore the things he sees and still accept Alexia as his son.

With its color scheme, soundtrack, and camera work, Julia Ducournau delivers a film that while is not for everyone’s eyes, will make genre film fans very happy. Titane which begins in destruction slowly morphs into a film about reconstruction, which Ducournau does so very well.  There are some brilliant sequences in this film, including one where Alexia is dancing on a hood of a car, while also answering the question to what firefighters do when they are just at the station. The film has it bouts with violence and while some of it can be extreme, it is not what defines the film by the end. Ultimately Titane is a mixture of a horror thriller with a tragic comedy, that reaffirms that you don’t want to ever miss a Julia Ducournau film.