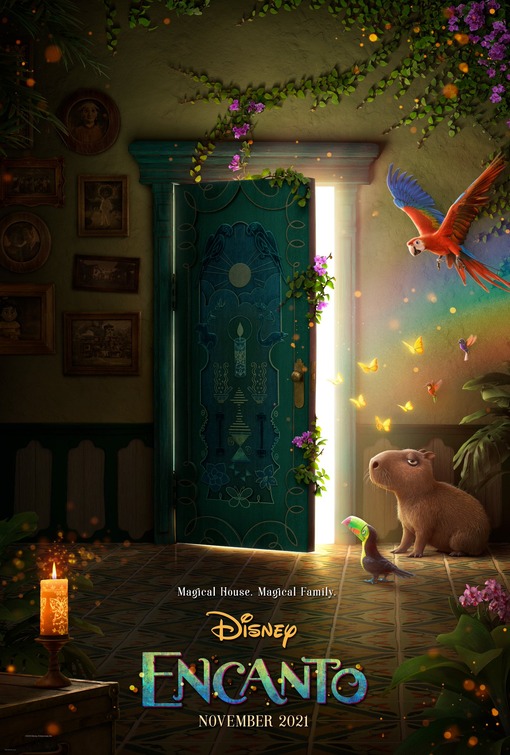 Everyone says their family is special in one way or another, but the Madrigal family truly are. Thanks to a magic candle, each member of the family is blessed with a gift. Well, everyone but Mirabel (Stephanie Beatriz), she got nothing. This is the basis for the next Disney animated feature as we travel to Colombia for magic and mayhem. Written by Charise Castro Smith and Jared Bush, Encanto follows the classic Disney formula, in which an outsider who is surrounded by an endearing and sometimes chaotic ensemble of characters must tackle a mysterious threat.

In the Madrigal house every member goes through a ritual in which they are given a gift. When it was Mirabel’s turn, nothing happens, not like it did with her sister Luisa (Jessica Darrow), who is super strong, or Isabela (Diane Guerrero), who fills the world with beauty and flowers. Everything is held together by Abuela Alma (María Cecillia Botero), who the magic all started with. After she lost her husband while fleeing armed men. It was in that moment when the candle was given to her and around it formed a magical house that is as much alive as anyone who lives in it. Soon the gifts for all the family members start to happen as they grow up, but there is something wrong with the magic and only Mirabel can see it. Other members of the family start to notice it as well as Luisa feels less strong and other signs show that something is amiss. Most of it points to uncle Bruno (John Leguizamo) and a vision he had before he disappeared and as Mirabel puts the puzzle together it turns out she might be the key to the Madrigals keeping their magic.

When you combine Byron Howard (Zootopia) and the many other people behind this story with songs by Lin-Manuel Miranda you are on your way to a great set up. Encanto is filled with beautiful colors  and even though there seems to be a lot to cover, the story never feels hasty. It helps that the narrative is told pretty straight forward and it is easy to relate to a character like Mirabel, as we have all had times where we felt not so special and excluded in our life. Encanto leans on its strength’s as it is a successful ensemble film that highlights the differences in the members of the Madrigal family in a way that stay with you. This though is a Disney film and we know what we are going to get by the end, but a Disney animated film isn’t complete unless you have a soundtrack that will be heard by parents in their car millions of times. This soundtrack is filled with Colombia musical traditions and of course typical rhythms of the country. I don’t know if the film has any of those dreaded ear worms, but it is filled with some really good songs. Overall Encanto does bring the usual Disney feel, while adding a slight pinch of magic to the usual. Even if it doesn’t have “classic” written all over it, it does a pretty good job of conveying not only the importance of family, but the work it takes to keep one together.