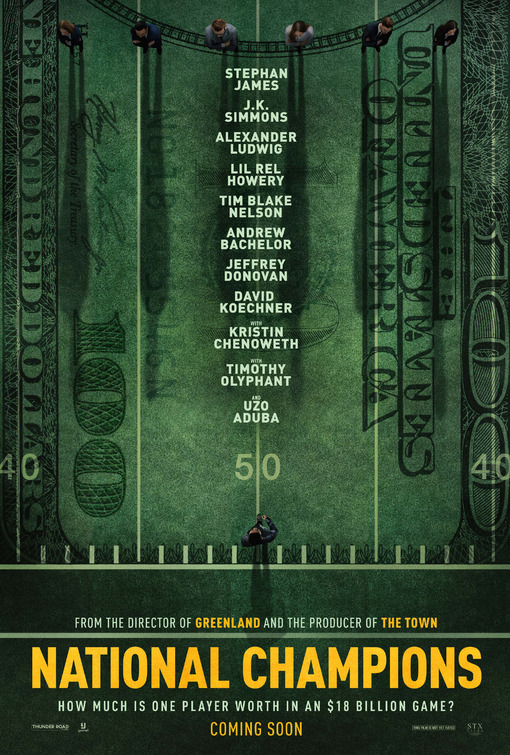 Over the last few years the world of sports has changed and with them the quintessential sports movie has followed. Now with the popularity of the off-the-field action on the rise and the business end of building a team seemly just as important as the actions of team itself, we are seeing more movies about that. I for one enjoy both sides of the coin, while I love a film like Bull Durham and Remember the Titans, I also really got into Draft Day and Moneyball, so I am always up for a good sports movie of any kind. National Champions looked like it could have something to say, but if I have learned anything, it’s that looks can be very deceiving.

It’s the weekend of College football’s biggest game between The Wolves and Cougars, and while everyone is ready for the game, the  star quarterback for The Wolves LeMarcus James (Stephan James) has something else planned. James, with the help of Emmett (Alexander Ludwig) are planning to lead a boycott of the big game. He puts this plan into action 48 hours before the game, sending a lot of people into panic mode, including his coach played by J.K Simmons, playing a role you might say took him too long to get around to. James has one demand, and that is that for the NCAA to change its rules and to pay its student-athletes fairly for the labor that brings in billions upon billions of dollars for the organization. In a story that seems ripped from today’s headlines, writer Adam Mervis tries to deliver a movie that asks and tries to answer that big question that has floated around collage sports for years now. The arguments, both pro and con are delivered in big and sometimes long speeches in a lot of hotel meeting rooms with the New Orleans Superdome in the backdrop, with I would assume is meant to be the equivalent of a general delivering a speech in front of a flag. Mervis, who also wrote the play with the same name doesn’t really open up anything that we see on screen, as the locations are visually bland as is the stories plot. Nothing happens that surprises you and the story actually becomes more tedious as it just seems to be the same thing happening like a broken record.

While National Champions lacks any form of good story telling, it does bring the star power into play. With names like J.K. Simmons, Kristen Chenoweth, Tim Blake Nelson and Timothy Olyphant, but  even with that cast, they are wasted in this lackluster thriller. Instead of speeches that pull you in, we get a bunch of angry monologues that while at times loud, are just empty and don’t really say anything we haven’t heard already. Instead the characters come off as mouthpieces, very basic and offer anything other than what they are intended to be. Maybe I expected too much, and while these are serious issues and worthy points brought up in here that are worth discussing, the film drops the ball too many times to be worth a watch.