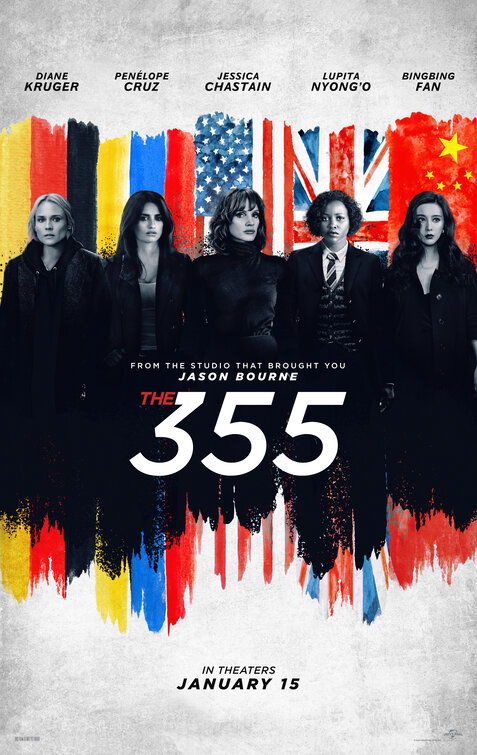 As Daniel Craig bids farewell to the Bond franchise, there has been an increasing chorus for the next Bond to be a female. That ,though does not look like it’s going to happen as Producer and keeper of Bond Barbara Boccoli is not interested in that. While that sandbox is not available to play in, someone is bound to come up with their own female led spy thriller and that is exactly what The 355  attempts. Written by Theresa Rebeck, Bek Smith, and Simon Kinberg, the later also directing, The 355 tries to deliver a sleek spy film, but the only thing I spied was a whole lot of missed opportunities.

With every spy film, you need something that could cause the destruction of the world, and at the center of this story is a computer drive that can control any computer on the earth. Enter the CIA, as they send Mason Browne (Jessica Chastain) and her partner Nick (Sebastian Stan) to purchase the drive and save the world. Of course things go wrong and they also discover that they are not the only agency trying to obtain this device. Also on the playing field is Marie Schmidt (Diane Kruger) from Germany, who can’t seem to nail their mark and miss out on their objective. When the person who had the drive doesn’t make it, they pick up Graciela (Penélope Cruz) who is a therapist brought in to bring the mark back home. Soon they realize that the only way to get what they need is to team up and as the three of them do, with the help of Khadijah (Lupita Nuong’o), who is the computer expert, they have a pretty good chance. With so many agents on the screen, it would have been nice for there to be more focus on the few than the many. This would have helped set the story more apart from other “team save the world” films. I wish though the only problem with the film was too many characters, as that is just the tip of the iceberg. While the cast on paper is fantastic, there are only a few in the lead roles that I would have wanted to see in an action movie. Stan is great, as is Cruz and Bingbing Fan, who plays a Chinese spy, but other than that the others look unnatural in this setting. It would have been better to build the action around actors who could do the stunts and not focus on just a name.

The action here though is real world grounded, as you won’t see any wild course from high rise to high rise, but instead things that might actually happen. What this translates to is no cool car chases or high tech gadgets and a film high on boring action. When you ass all the spy cliches in, you are left with something not very original that finds a way to waste a great cast. I would have much preferred something original, but just adding women to a movie like this isn’t enough to make it good. When you also add the run time and the obvious answer to their problem could have been solved, by just destroying the drive, The 355  just becomes wasted space.