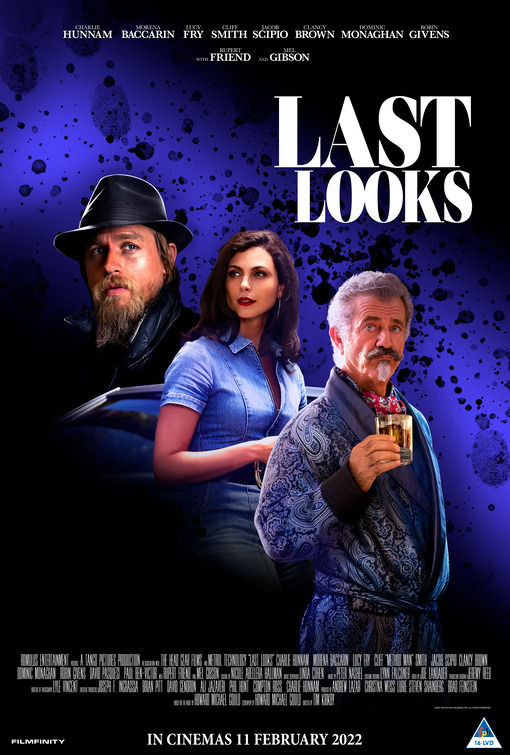 Like the next person, I love a good detective movie, so anytime a new one pops on my radar, it’s not a question if I am going to watch it, but when. Needless to say Last Looks got my attention, not only because there is a mystery to solve, but also because it has Charlie Hunnam playing detective and Mel Gibson, well playing what I just picture Mel Gibson mostly being like in real life. Based on the novel by Howard Michael Gould, who also writes the screenplay, Last Looks uses Hollywood as its backdrop as a killer needs to be found out before it’s too late.

Charlie Waldo (Charlie Hunnam) looks like he has decided to get away from it all. Currently he lives off the grid and spends his days doing yoga and well, not much else. That changes when a woman from his past named Lorena (Morena Baccarin) shows up and asks for his help with solving a case that she is on. You see Waldo used to be a cop, but he left that all behind after it didn’t agree with him anymore. Charlie of course turns her down, after all he is living his best life, but after Lorena leaves, he is visited by others, which convince him that he needs to go back to society. When he gets there, he finds out that Lorena has disappeared and decides to investigate. It seems a popular actor named Alastair Pinch (Mel Gibson) has gone and killed his wife, at least that is what people are saying, but Alastair says otherwise, which leaves Charlie reluctantly taking the job to find the truth. Gibson, channeling some Nic Cage energy plays Alastair like everyone’s favorite drunk uncle and seems like he is having the time of his life. Gibson and Hunnam, both show up as well as the rest of the ensemble cast that includes Clancy Brown, Robin Givens, Dominic Monaghan, and Method Man. Where Last Looks loses its way a bit in the story, which does have a nice balance of action and comedy, it’s just that the main focus doesn’t deliver. Like any good detective story, the film has its twists and turns and I rather enjoyed Hunnam weaving himself though the backlots and the seedy underbelly of Hollywood, but while some of the plot points work, others land with a thud. By the time we get to the big reveal, you are kind of ready for it to end, even if the world that was bult was pretty cool to reside in.

I really wanted to enjoy Last Looks more than I did, as it seemed to have everything working for it on the surface. It just never reaches the level of films like The Nice Guys, Kiss Kiss, Bang Bang, or more recently, The Kid Detective, but at the same time it’s not a bad picture ether. Instead it falls in the place most movies don’t to be, and that is in the middle. Where movies go to be forgotten. I wish it could have been different, as there is some good scattered throughout, but it isn’t enough in the end to make a case for this film that probably played better on the page of a paperback than it does here.

Ghosts of the Ozarks