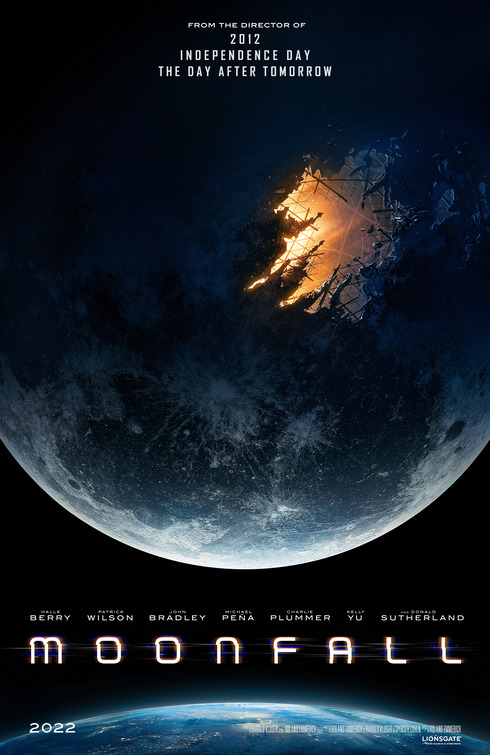 In the 1970’s Irwin Allen was called the “master of disaster” because of his films The Poseidon Adventure and The Towering Inferno, where he made you think twice about living in a high rise tower or taking a cruise. While those films had some grand scenes of mass disaster, it also gave us an all-star cast, where most of them didn’t survive. Fast forward some fifty years later and Roland Emmerich has been given that title, thanks to films like The Day After Tomorrow and 2012 and having run out of ways to destroy the Earth from within, he brings a new menace to our lives from the depths of space, the moon.

Something is rotten in Denmark, or should I say in space, as the moon has left its normal orbit and is getting closer to earth. This of course is not a good thing, but no one knows quite yet, except KC Houseman (John Bradley) is on to it and when NASA won’t listen to him, he leaks it himself. Time is not on his side and it is up to Houseman and washed out astronaut Brian Harper (Patrick Wilson) to figure out how to stop the moon from falling. Harper though is not on speaking terms with NASA right now after an event, but this is not the time for bad blood and the new acting NASA Chief Jocinda Fowl (Halle Berry), who used to be in the same shuttle crew as Harper, have come up with a plan that just might save us all.

Emmerich, who co-wrote the script with Harald Kloser and Spenser Cohen decide that simple disaster films are so 2012 and have thrown the entire disaster sink at us with Moonfall. You want cities getting destroyed? Check. A mysterious force that wants to wipe us out? Check. I mean we are really screwed in this one. While the writers want to destroy the world, they also destroy the script, with its many plot holes and unadventurous ideas, which is to say they don’t have any fresh takes on the material. We are supposed to believe this washed out astronaut who can’t even make a speaking engagement on time, can just hop back in the space shuttle like ten years didn’t just pass? Unlikely heroes are the stuff that disaster movies are made of, but when two of your lead characters have little to no chemistry, things are not going to go well. By the time we get to the big climactic finish, you have given up caring what happens as the film hits and exceeds ludicrous speed and has chosen, just plan nonsense.

I am not going to tell you that Moonfall is anything pretty, but somehow, in spite its many, many flaws, the final effect isn’t as bad as it appears. That’s not to say its a good movie, but its total lack of any substance makes it go down pretty easy. It does get hard to get pass the subpar acting, but the good thing is that, the visuals are top notch, which makes the destroying of things look pretty good. However, good looks alone can’t save this movie and when it’s all said and done, Moonfail would have been a more appropriate title.