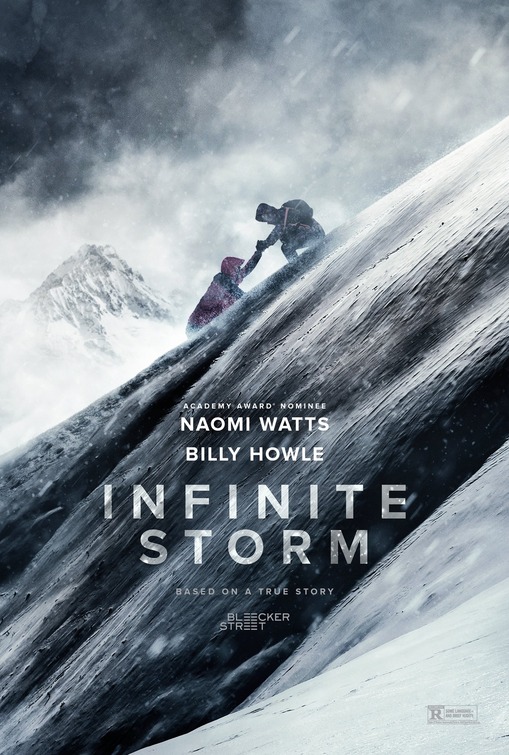 Ten years ago Naomi Watts battled to save her family from the 2004 Indian Ocean tsunami in The Impossible. To mark that occasion Watts has returned to battle the elements once again, this time she takes on a blizzard. Taking on natural disasters seems to bring out the best in Watts as she heads into the Infinite Storm.

This time Watts plays Pam Bales, who has woken up to a beautiful day to do a little hiking on Mt. Washington. As she prepares to leave the parking lot, she notices a car there and asks a couple leaving if they know whose it is. After they tell her they do not, she heads up the mountain to enjoy some of that fresh air. Halfway up though, a brutal storm hits and when she is about to turn around she notices some foot prints, probably from the person who owns that car in the parking lot. While fighting conditions where visibility is low and temperatures are dropping fast, she finds this person dressed more for a day at the beach than for this storm. His attire is also the cause of him being half-unconscious and with him not being able to respond, Pam calls him “John” (Billy Howle) and does her best to get him warm, so that they can start their trek back down the mountain. Eventually ‘John” comes around some, but he seems to be against Pam taking him down and with the weather seemingly getting worse, things become even more challenging for Pam.

Written by Joshua Rollins from Pam Bales book about her life, Infinite Storm does an excellent job of putting you in the character’s shoes, I mean you can feel how miserable it is. Director Malgorzata Szumowska of course also has a lot to do with that and gives the natural beauty of the mountain an immense danger it can become when facing the elements. All of it comes together though because of Watts, whose portrayal of Pam’s hell-or-high- water attitude is stellar. Watts also makes us invest in her survival, which is even more impressive as there is very little backstory to Pam in the first half of the movie. Once you do find out about it, it’s easier to understand Pam’s push to save “John”, something she tries to do even at the possible expense of her own life.

Infinite Storm  is one of those movies you are going to love seeing in the theater as its environment is very immersive. Not only do you see what the characters are going through but the sound, or at times, the lack of it play a big part in this film. What takes it beyond your typical disaster movie is Watts performance and the humanity the film shows as it really is this nail-biting tale of two people fighting for survival, not against a mythical CGI beast of a storm, but nature as it can be. Infinite Storm is a solid film and also sets up the hope of Watts taking on a new disaster every ten years.

You Are Not My Mother