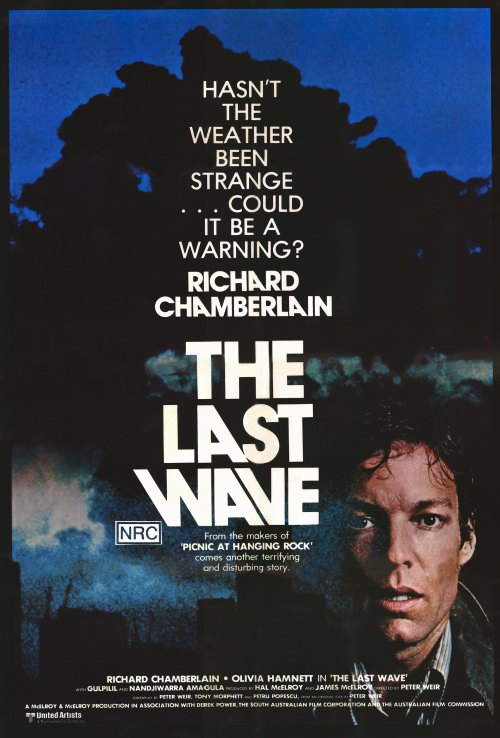 A man with a wife two kids and a house in suburbia has bad dreams. But what happens when those nightmares are seen as visions of the future? That is the question Peter Weir attempts to ask in The Last Wave. David Burton (Richard Chamberlain) is a lawyer who takes on a case involving the mysterious death of an Aboriginal man. Chosen to defend the other Aboriginal men charged with the murder of the man, he tries to understand their beliefs and traditions. As strange weather occurs around the world, like hail storms in Vegas and torrential rains in Australia, David’s nightmares increase, like one of a man holding a bloody stone. When David then meets one of the men involved in the crime, Chris Lee (David Gulpilil) he instantly recognizes him as the man from his dream.

As David delves deeper into the history and spiritual world of these even more mysterious people, his visions are now invading his waking life. Being apocalyptic in nature, and fearing for his wife (Olivia Hamnett) and children’s safety David feels compelled to discover the truth no matter the cost.

The Last Wave feels very much like Peter Weir coming out of The Omen and saying, “I can do something like that.” And unfortunately that’s what it plays like, “something” like The Omen. Not as unnerving, not filled with tension, and not very scary. The didgeridoo, a wind instrument made by the Aboriginal people used in a mystery drama does bring something to the table, but gets played out by the end.

What I was interested to see Weir tapping into was the unexplored folklore in Aboriginal history. There is so much there, from Dreamtime, to shapeshifting, to spirits from other worlds coming to ours. And what little time is set in the courtroom has David trying to establish these beliefs, that may turn out to be true to the public. That is something else that could have brought a whole other level to the film. But most of these elements are just paid lip service and not much else. It’s also a bit daunting to see where everything is heading and have the main character seven steps behind, no matter how pragmatic he appears to be. That leads to the other drawback, Chamberlin’s performance, he often goes flat from one scene to the next, he never looks to be unraveling despite all he’s shown at least not until the films final moments.

This comes off very much like a swing and a miss for Weir, who managed to bring true tension and mystery in his previous film Picnic at Hanging Rock. Here makes horrific visions and a possible end of the world scenario a pale imitation of something much better.

Released at the end of the year The Last Wave didn’t need to worry about being swallowed by Star Wars because the following year saw horror sequels like Damien: Omen II, Dawn of the Dead, and the film that would change the face of horror forever: John Carpenter’s Halloween. This would’t affect Weir too much as he changed gears and directed films like Gallipoli, and The Year of Living Dangerously. He would then break big in America with classics like Witness, Dead Poets Society, the underrated Master and Commander: The Far Side if the World and of course his most impressive film top to bottom, as well as my favorite of his, The Truman Show.

You Are Not My Mother