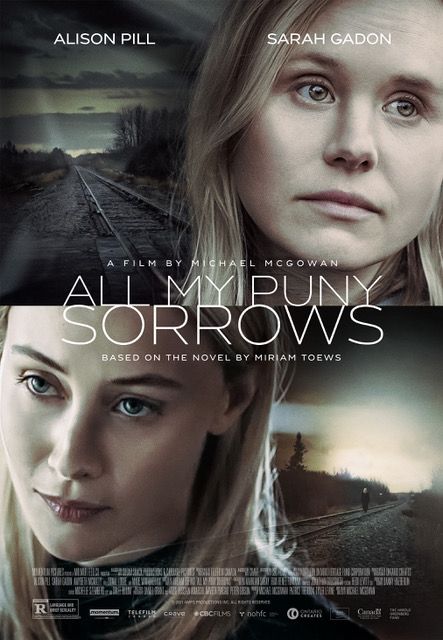 Looking at people’s life from afar, one could sometimes misjudge another’s life. You may see someone who looks like they have it all and find out that they took their own life only leaving questions that often start with “Why?”.  While on the surface you search for answers you soon might discover that while they looked like they had it all, something made their life too difficult to carry on. Mental illness is a problem that often gets overlooked, because it seems not many people want to talk about it. Well Miriam Toews’ acclaimed novel All My Puny Sorrows opens up that conversation and does an excellent job of putting mental illness right on front street.

Yoli ( Alison Pill) is a writer, who while going through her own problems, struggles to finish her next book. That problem is a messy divorce, one her own daughter Nora (Amybeth McNulty) doesn’t think she is handling very well. Meanwhile Yoli’s sister Elfrida (Sarah Gadon), who is an accomplished pianist has hit a point in her life that she doesn’t think she can go on from and takes the most drastic of measures. Elfrida, or know to her family as “Elf” does not succeed, instead she ends up in a hospital. Having lost their father to suicide some ten years earlier, Yoli heads home to talk to her sister as she deals with the emotional baggage of her own life. Yoli and Elf’s relationship is a special one and for as angry as Yoli is at her sister they spend the days in the hospital room telling stories of their past and present lives. While Yoli and her mother try and save Elf, she has other plans for herself.

Written  and directed by Michael McGowan from Toews novel , All My Puny Sorrows  is a very good film that is both intelligent and insightful. While the script hits on a down note with conversations that must be had, it also has its share of warm humor that keeps it from being a complete downer.  All of this helps the movie deliver an admirable look the way shared trauma affects different individuals on multiple levels.

All my Puny Sorrows  is also helped by a cast that is perfect from top to bottom. Pill really shines, so much so she is able to make up for Godon, whose character feels a little underwritten. We spend our time living in Yoli’s life and experiencing her feelings for what she is going through, and not so much with Elf, which never gives us insight on why she wants what she wants. All My Puny Sorrows  will hit some harder than others because of its tricky subject matter, but don’t let that deter you from seeing it. While it might have its issues, mainly a third act that loses its way, when it works, it works very well and maybe it will start some very much needed conversations.

Doctor Strange in the Multiverse of Madness