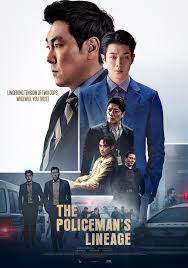 Somewhere into the story in Kyu-maan Lee’s new film The Policeman’s Lineage, two cops are having a conversation on what it takes to be a policeman. One tells the other that it is not about “black and white”, but living somewhere in the gray areas in order to be a good cop. While I have never been a cop, I have watched a lot of different kinds of cop movies and shows and it seems like a pretty accurate statement. That is not me thinking all cops are like that, but I do think there are more than we would like.

For Detective Choi Min Jae (Choi Woo-sik) he has always wanted to be a cop, as it runs in his family.  Although police work is in his DNA , it is his father’s untimely death that motivates him. It is after he refuses to lie to help make an arrest that Detective Choi gets the attention of Internal Affairs who want him to help investigate what another cop is up to. Choi is assigned to a unit lead by Chief Park Gang Yoom (Cho Jin-woong), who might have his hand in a couple of cookie jars that he shouldn’t. Choi blends in with the unit and starts to gather evidence in hopes to find that thing that he needs to help bring Park down. As he gets deeper into the investigation he finds that even though things might look fishy, Choi concludes that there is nothing to pursue. That is not what the people who sent them wanted to hear, so they come in to find the missing piece to catch Park, but they find nothing, which puts the spotlight on Choi. It is then that Choi finds out some truths and he has to decide who’s orders he will follow when the time comes for him to decide.

Written by Bae Young-Ik , The Policemen’s Lineage  tries its best to juggle different story elements but to no avail. Although there are some twists in the story that do add some dramatic turns, most of it is predictable and leaves you wanting. That though is not the only problems that persists as decisions are made by characters that will leave you scratching your head. It’s like despite its good cast, The Policemen’s Lineage can’t get out of its own way as it ends up making things more complicated than they need to be.

As a fan of South Korean cinema I definitely left this one disappointed. I, like the next person, love a good police film with all the trimmings, but this one can’t seem to find the right path to follow. The cast is underutilized and with its failure to deliver an original story puts The Policeman’s Lineage square in mediocrity. It is landing in that place that makes watching it so dissatisfying, because if you are like me and love South Korean movies, you have come to expect more. Police Procedurals are kind of my jam and just like cops in real life you have good ones as well as bad. The Policemen’s Lineage is neither of those and while it does have some finer moments it’s not going to stick with you.