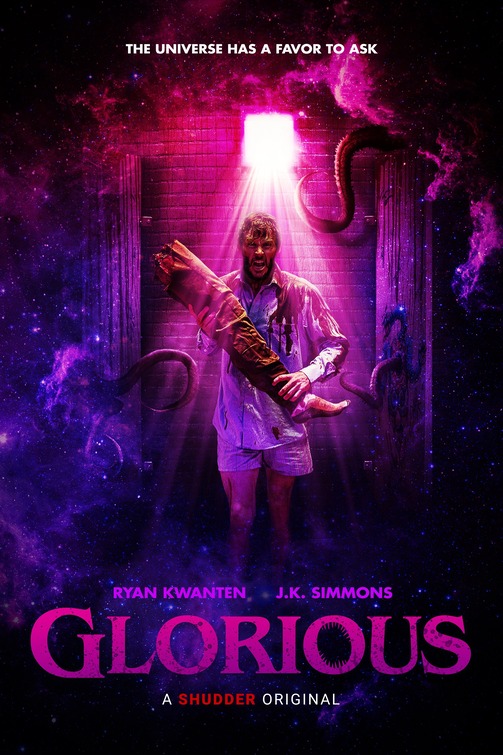 It’s hard nowadays to go into a movie knowing as little as possible about what you are going to see. I mean with all of the advertisements and commercials that inundate you, there are unfortunately many times you feel you have seen the movie before you actually see it. I somehow avoided that and went into Glorious knowing almost nothing, other than it was “Lovecraftian Horror” and to be honest that’s all I needed. What I ended up getting was a pleasant surprise and one of my favorite movies I have seen this year so far.

For Wes (Ryan Kwanten) life is not the best of times. He is currently driving somewhere and is not handling a break-up too well. He stops at a rest stop that soon turns into a drunken night of burning the memories of his relationship away, Along with what seems like everything else in his car as well. After downing a bottle of Jack he wakes up the next day on the ground and pant-less. While getting his bearings the previous night comes back to haunt him as he races to the bathroom to get it all out. It is in the middle of this experience that a voice in the stall (J.K. Simmons) next to him ask if “that was all”. Now, having anyone talk to you from a bathroom stall is strange enough, but this one feels even more stranger. Wes doesn’t know the half of it and let’s just say that this hangover is not going to go at all how he planned it.

There is more to this story, which was written by Joshua Hull, David Ian McKendry, and Todd Rigney, but I am going to let you experience that for yourself. What I can tell you is that Glorious serves up a strange slice of cosmic horror that manages to be funny, horrifying, twisted and visually striking and at times it does all four at the same time. The film builds and builds, but still winds up going in surprising places that subvert expectations. Glorious is a ton of fun and it does it all in a tight 79 minutes with pretty much one location and two actors, one of which is just a voice.

The story comes down to a shared trait that Wes and the Voice have in common, that being daddy issues. Both of them come from upbringings that are toxic and both commit self-annihilating behavior. Director Rebekah McKendry and Cinematographer David Matthews do wonders with the space as the keep the look a little off-kilter. This visually never get dull, but you have to give a lot of credit to Kwanten, who is all in and gives a very captivating performance while mostly being by himself. Simmons on the other hand has the perfect voice for this role and with Kwanten’s intensity there is no dragging or rushing, so things can’t go terribly wrong. This is going to be one of those movies I will watch often, I enjoyed it that much and I think you will too.