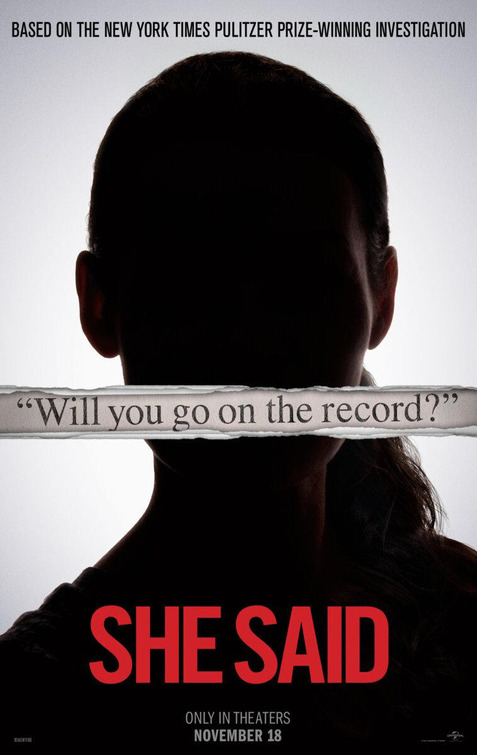 There tend to be a handful of films that will always get me to see them regardless of who made it of who stars in it. They usually involve films that take place mostly in one location or a story featuring investigating journalism. So with that said it wasn’t going to be a challenge getting me to show up for the new film She Said, and let me tell you it has all the troupes that make me love a film like this.

Most people have heard the story about Harvey Weinstein and the trail of terror he left through Hollywood for years. Weinstein was what some might call a mogul, who seemed untouchable, but that all changed when two reporters from the New York Times wrote a story that started a movement. Jodi Kantor (Zoe Kazan) had just finished a story and took on the task of finding the little talked about sexual harassment in Hollywood. She came across some info that brought her focus to Weinstein and some stories of actresses who had had made some claims that were mostly being ignored. Kantor started to work the phones, but although she had names, she could not get anyone to speak to her about what had happened. The Times soon added Megan Twohey (Carey Mulligan) to help with the leads they had, some of them steering them to more than a few actress with household names. Even with those names, and many more, there are walls everywhere and no one wants to go on the record. Persistence though wins out as Twohey and Kantor reach the right people, where truth and more importantly proof starts to break through. Armed with their information and a few who are willing to go on the record, Kantor and Twohey are able to bring Weinstein down and start a movement.

With a screenplay written Rebecca Lenkiewicz, based on the New York Times article from Twohey and Kantor, She Said pulls your full attention, even if you know how it ends. Lenkiewicz’s screenplay also conveys the emotional turmoil of each character, all while remaining sensitive towards Weinstein’s victims. The thing that drives me to these stories is the watching as the puzzle pieces find their place and the overall picture starts to come into focus. She Said is brilliant at showing step by step, how Twohey and Kantor were able to get those pieces, which makes the resulting outcome all the more satisfying

She Said checks all the boxes for a great investigative journalism film and reminds us just how important persistent journalist are to brining to the light some of the dark deeds of the world. It is that reason that She Said  is one of the more powerful movies of the year. It is a thrilling and vital entry into the journalism film world and never feels like a reenactment, but like you are watching it all unfold in real time. The cast in fantastic, but it’s Mulligan and Kazan that lead the way , giving life to these two reporters who gave so many woman a platform for their voices to now be heard.